A View from the Sky 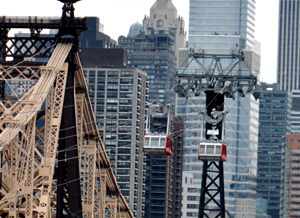 An aerial view of New York is hard to come by, but the new Roosevelt Island Tramway offers locals and visitors a three-minute spectacular bird's eye view.

After nine months of renovations, the Roosevelt Island Tramway finally opened to the public last month. The modernization of the 33-year-old tramway means reduced travel time, more stability in high winds, decreased electrical and mechanical malfunctions, and two separate cable tracks to combat rush hour traffic.
For the cost of a MetroCard swipe, passengers can hop on the tram for a quick ride to explore island landmarks like the 50-foot lighthouse built in 1872 by inmates once imprisoned at the Blackwell's Penitentiary and the brick and stone Chapel of the Good Shepherd constructed in 1889.

Located between Manhattan and Queens, Roosevelt Island was originally named Minnahanonck, or "nice island," by the Native Americans of the Hudson Channel. In its colorful history, the island has been home to the New York Lunatic Asylum, Blackwell Penitentiary, the nation's first smallpox hospital, New York City Fire Department training structures, and now, city residents looking for a little respite from the chaos of Manhattan.
*This article originally appeared in the Dec. 27, 2010 edition of WeekendNotes.
Posted by Melody Serafino at 6:08 PM